Local Dimensions of the Second World War in Southeastern Europe

This book deals with the Second World War in Southeastern Europe from the perspective of conditions on the ground during the conflict. The focus is on the reshaping of ethnic and religious groups in wartime, on the "top-down" and "bottom-up" dynamics of mass violence, and on the local dimensions of the Holocaust. The approach breaks with the national narratives and "top-down" political and military histories that continue to be the predominant paradigms for the Second World War in this part of Europe.

Local Approaches to the Second World War in Southeastern Europe: An Introduction

PART I – GROUP-MAKING AS A PROCESS

Chapter 1 – Heirs of the Roman Empire? Aromanians and the Fascist Occupation of Greece (1941-1943)

Chapter 2 – "The Task of the Century:" Local Dimensions of the Policy of Forced Conversion in the Independent State of Croatia (1941-1942)

Chapter 3 – Forced Identities: The Use of the Category "Yugoslav" to Classify Inmates in the Mauthausen, Buchenwald and Dachau Nazi Concentration Camps (1941-1945)

Chapter 4 – Controlling Space and People: War, Territoriality and Population Engineering in Greece during the 1940s

Chapter 5 – Spatial and Temporal Logics of Violence: The Independent State of Croatia in the Districts of Glina and Vrginmost (April 1941-January 1942)

Chapter 6 – Dynamics of Unrestrained Violence: The Massacre of Distomo (10 June 1944)

Chapter 8 – Resistance or Collaboration? The Greek Christian Elites of Thessaloniki facing the Holocaust (1941-1943)

Chapter 9 – Being a Jew in Zagreb in 1941: Life and Death of Lovoslav Schick

Chapter 10 – Escape into Normality: Entertainment and Propaganda in Belgrade during the Occupation (1941-1944)

(Re-)Scaling the Second World War: Regimes of Historicity and the Legacies of the Cold War in Europe 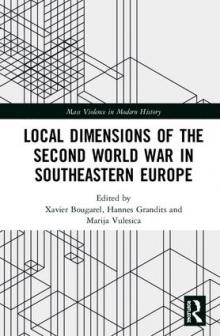