International history cannot be restricted to the basic study of diplomacy anymore; a recent wave of scholarship enlarged international history’s traditional focus to make it encompass the social dynamics that shaped early modern and modern societies. This new social history of diplomacy stresses the diversity of the institutional and non-institutional agents –ambassadors, consuls, merchants, interpreters, freemasons or pirates…– involved in the different and diverse processes of negotiation. At the same time, the constitution of a “milieu” as well as the social integration of diplomats through their networks and patronages are now slightly emphasized. This historical trend regularly intersects with the prolific history of the trading diasporas and both of them examine the numerous interconnections and interferences between diplomacy, trade and knowledge vehicle by merchants, interpreters or clergymen. Intellectual history also benefits from such a synergy and the study of the circulation of knowledge within diplomatic and commercial networks, as well as the numerous technological and intellectual transfers supported by, for example, the Jewish, Jacobite or Huguenot diasporas has lead to an increased attention paid to regional phenomena. As a result of this vibrant renewal, two antagonistic historiographical trends emerge to offer an interpretation of regional social phenomena. The first one emphasizes the role played by cross-cultural brokers and acknowledges the existence a large panel of actors able to connect different societies thanks specific commercial, linguistic or political skills. The second one questions such inter-/trans-national/religious/cultural paradigms arguing that it leads to focusing too narrowly on borders and therefore to overlooking the social practices of the actors who crossed them. To remedy this, the second approach disconnects both the political and social layers to get a better understanding of networks and clienteles. Comparing the two models, recent international research projects (such as the ANR/DFGs Euroscientia and Musici or the ERCs ConfigMed and Jagiellonians) provide a new methodology that pays close attention to regional phenomena and deconstructs given geographical categories. In fact, they argue, diplomacy, trade and knowledge generated criss-crossing and overlapping circulations that have now to be compared and connected with one another. With this as a starting point, the workshop aims to confront, share and discuss the fresh claims on eighteenth century international history and its social approaches. The scientific committee of this conference has particularly encouraged proposals that were able to link at least two of the three sectors (diplomacy, trade and knowledge) and those that dealt with the opportunities and limits of such trans-sectorial history. Contributions that were able to handle different academic historiographies and traditions have been be strongly privileged as well. 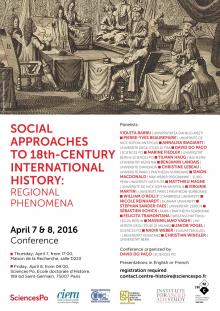